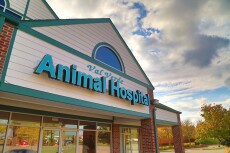 Bailey enjoyed his hike with his mom while in Colorado earlier this summer!

Loves long walks on the beach and a good rawhide!